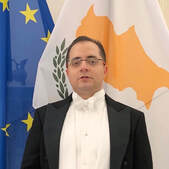 Mr. Theodoros D. Gotsis -President of the ExCom (Consul General of the Republic of Cyprus in the UK)
Mr. Theodoros D. Gotsis is a career Diplomat who currently heads the Consular Section of the Cyprus High Commission in London. He has been also elected and currently serves as President of the Executive Committee of the Consular Corps of London. He has previously served as Delegate of the Republic of Cyprus to Mashreq/Maghreb (MaMa) and Middle East/Gulf (MOG) Working Parties in the Council of the European Union (2014-2018).
Mr. Gotsis joined the Diplomatic Service in 2009 and has previously served at the Office of the Permanent Secretary of the Ministry of Foreign Affairs of the Republic of Cyprus (2013-2014), where he dealt with horizontal foreign policy issues, as well as with administrative affairs of the Ministry and its Diplomatic Missions worldwide.
During his service, he has also served at the Division of Cyprus Question and Turkey, at the Political Division (Department of Multilateral Affairs and International Organizations, Department of Africa), as well as at the Policy Planning Division.
Mr. Gotsis holds an MSc in History of International Relations from the London School of Economics (LSE) and a BA in History and Archaeology from the Aristotle University of Thessaloniki in Greece. He is a PhD candidate in Diplomatic History of the 20th Century at the University of Athens.

Mr. Bernard Silver (President Emeritus) - Co-Opted Member
Erstwhile Honorary Consul for the Republic of Seychelles, Chairman of a Public Company in international marketing and foreign languages (film subtitling and dubbing) with a parallel career as a Parliamentary Candidate in the UK who has hung up his rosette to make the switch from politics to diplomacy, whilst learning to be polite in the process. He first attended the Consular Corps as a guest speaker​

Ms Elizabeth Stewart (Embassy Magazine) - Co-Opted Member
​Elizabeth has over a decade's experience in diplomatic reporting, having worked at Diplomat magazine since 1998. She was editor of the magazine for six years and was responsible for its successful relaunch in 2001. Elizabeth is a member of the Women in Diplomatic Service, the consular Corps of London and publishes Password, a magazine for the Foreign and Commonwealth Office Association.

Mr. Minos Papanikolaou - Permanent Secretary
Minos Papanikolaou studied Politics and International Relations for his undergraduate degree at the University of Greenwich and he is holding a Masters Degree in Diplomatic Studies from the Diplomatic Academy of London - University of Westminster.  He joined the Consular Corps of London as their Permanent Secretary in March 2013. ​