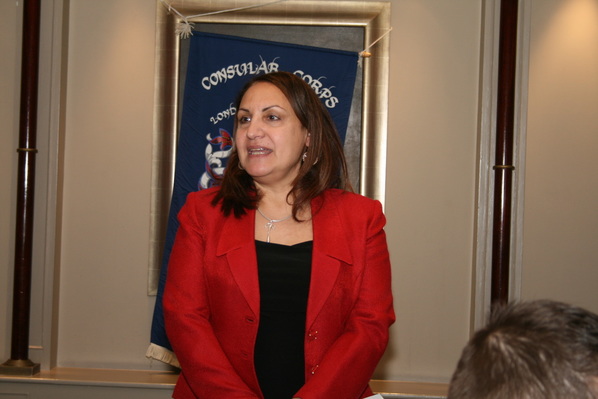 Consuls urged to join fight against human trafficking
A British MEP has appealed to consuls in the UK for help in rooting out human trafficking at a recent Consular Corps lunch. Mrs Marina Yannakoudakis, who serves on the Women’s Rights Committee in the European Parliament, urged consuls to be extra vigilant when dealing with nationals who could potentially have been trafficked. “Trafficked women and children have paperwork and when they come to the consulate and
something seems suspicious, carry out robust checks and don’t take things at face value.” She also urged consuls to be active in raising awareness about the dangers of human trafficking both with their communities in the UK and back home. Sharing information with EU partners and third coun
tries was also important in combating trafficking, which Mrs Yannakoudakis said was the fastest growing criminal industry in the world, estimated at US$5 to US$9 billion, with between 700,000 to four million victims worldwide. Mrs Yannakoudakis, who was involved in creating the new EU Directive against human trafficking, said its key aims were “protection, prevention and partnership”.