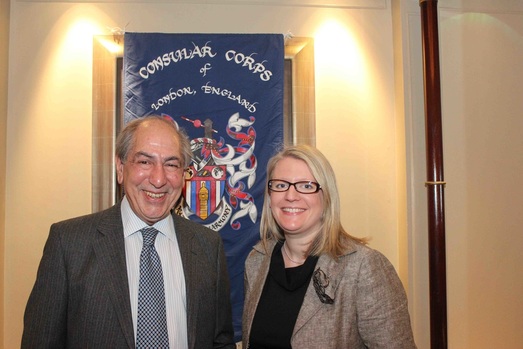 Consuls urged to help deport offenders
A senior Ministry of Justice official has appealed to consuls in the UK to assist the British government in expediting the deportation of foreign criminals from the UK and warned that ex-offenders would no longer be able to hide behind “weak human rights claims” to remain in the UK.
Addressing the Consular Corps of London, Helen Measures, the head of Foreign National Offender Policy at the Ministry of Justice, said verifying the identity and nationality of foreign criminals and obtaining travel documents was one of the main delaying factors in the deportation process, which meant ex-convicts who had served their sentences were still being detained, some for long periods, in immigration removal centres.
Ms Measures said the Government “relied heavily” on the cooperation of high commissions and embassies to help establish the nationality and identity of the FNOs and to provide travel documents, particularly for those who were non-compliant.
She added that the Ministry of Justice was eager to develop “a streamlined process” with missions to avoid individuals “hanging around for months or years not knowing when they will be removed.”
Of the 11,000 foreign national offenders (FNOs) in the UK, 7,600 were currently serving their sentence in prison, while the remaining 3,400 were either on remand or were being held in detention under immigration law.
Efforts were “being intensified” to remove more FNOs – each of whom cost the British taxpayer £40,000 annually – by blocking commonly used loopholes in the system.
These include FNOs not providing documentation to enable officials to accurately identify their nationality and identity.
She added it was increasingly the case that FNOs were using Article 8 of the European Convention of Human Rights to remain in the UK by claiming their right to a family life.
Ms Measures said it was important to “strike a balance” between the rights of the individual and the public safety.
“Our approach under the new Rules has introduced clear criteria to protect the public from foreign criminals who try to hide behind weak human rights claims to prevent their removal from the UK,” said Ms Measures.
But with some immigration judges ignoring these new rules – which they claim are outweighed by the Human Rights Act – Home Secretary Theresa May has also announced the introduction of primary legislation where the right to family life will no longer be a bar to deportation.
On the composition of FNO population, Ms Measures pointed to a “shift in the distribution of nationalities” with Jamaicans and Nigerians, while still high in volume, being overtaken by Eastern European nationalities such as Poland and Romania.
“This raises an interesting policy question, which we’re looking at now, on whether we need to change our approach,” she said.